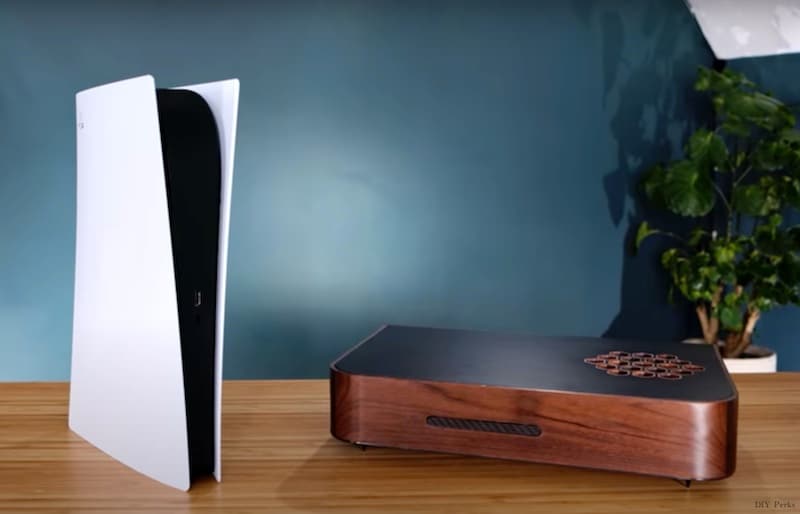 When the design of the PlayStation 5 gaming console was revealed to the public in June, the Internet  compared it with everything from a Wi-Fi router to a mitre or a Pope’s hat. But whatever you think of the console, there’s no denying that it was made to stand out with its gargantuan, bright white design. Now, a YouTuber has customised the PS5 with wood to turn it into a more compact machine that a lot of us would prefer to own instead.

There’s no denying that Sony’s latest hardware is unusually large for a modern gaming console and stands over 15 inches tall. Compared to this, the Xbox Series X height is less than 12 inches. One of the reasons for the PS5 to have such a large body was that its architects wanted to ensure smooth airflow to make the platform as quiet as possible. But YouTuber DIY Perks has shown in a new video that the machine can remain and look cool even if the exterior bulk is removed. He gave the device a “stealthy” design.

He removed everything from the original casing, leaving only the “core of the unit.” He added PCB pillar supports on each corner to support the device sit flat and then screwed on the power supply. The new outer casing was made from a combination of carbon fibre and walnut hardwood. He strategically placed foam strips to address potential cooling and airflow issues. The YouTuber utilized other smart solutions for the back vents, USB ports, and power button, and the result of his effort was stunning.

“Absolutely stunning! Love the redesign!” commented a person with the username “Make Something”.

“One of these days he needs to be stopped, his abilities are getting too powerful,” said videogame1291.

However, one user, TheKluxi1, rued the unavailability of enough consoles, saying, “The most difficult part is buying the PS5”.

With people trying innovative ideas to make the console compact, the time is not far when Sony will feel bound to release a sleek version eventually.

The situation indicated that Sony continues to supply fewer PS5 units to India, even though the company has seen staggering demand. This was only the third PS5 India pre-order round.